KD 10 sneakers are the newest shoes from Nike that are an upgrade from their previous top-of-the-line basketball shoe, the KD 9 sneakers, which were released in 2015.

The KD 10s have been promoted as being engineered with tech innovations for better performance on the court, making them perfect for anyone who wants to get serious about basketball and improve their skills over time.

Kevin Durant's 10th sneaker is as dynamic and responsive as KD, always ready to play and compete. Nike Zoom Air cushioning transfers impact energy to your foot for ultra-responsiveness, while the lightweight zoned Flyknit gives zones of breathability and stretch.

The large oversize laces on the KD 10 seem cemented into the midsole since they are stretched broad and low. The shoe is just as wearable anytime, anywhere, thanks to expressive knit pops between the laces and many ways to decorate the strings.

It’s important to know what makes these shoes so special and how they stack up against other basketball sneakers, so you can make an informed decision before buying them. Here’s what you need to know about the KD 10 sneakers, a list of top 10 KD 10 shoes we so much love.

The Golden State Warriors' team colors are represented through a knit top woven with overt blue and yellow tones. The Swoosh, KD branding, and speckles on the midsole all have gold accents. A plethora of statistics are scribbled on the insole, above critiques leveled at KD for heading to Golden State.

Kevin Durant's move to the Golden State Warriors was welcomed with ridicule and jeers, but he's 'Still KD' now that the commotion has gone down. With a white Flyknit upper for a locked-down fit, his tenth trademark shoe comes in a simple and subtle colorway. Grey details on the heel cage and branding contrast with the 'Still KD' colorway, while the Swoosh is accentuated in a silver tint for contrast.

The KD 10 comes in the traditional black and white "Oreo" design, with a seamless Flyknit construction throughout the upper and a black heel cage for further support and stability. The basketball shoe has an asymmetrical lacing system that adds a lifestyle element while also providing a more secure fit. It is contrasted with a white Swoosh and midsole.

Nike released a sleek colorway with distinct, performance-enhancing elements for Kevin Durant's 10th signature shoe. The KD 10 'Triple Black' has a black Flyknit upper with huge rope laces that run the length of the shoe. Leather overlays, a tonal Swoosh, a wrap-around tongue for an adaptive fit, and a full-length, fully visible Zoom Air unit round out the sneaker. 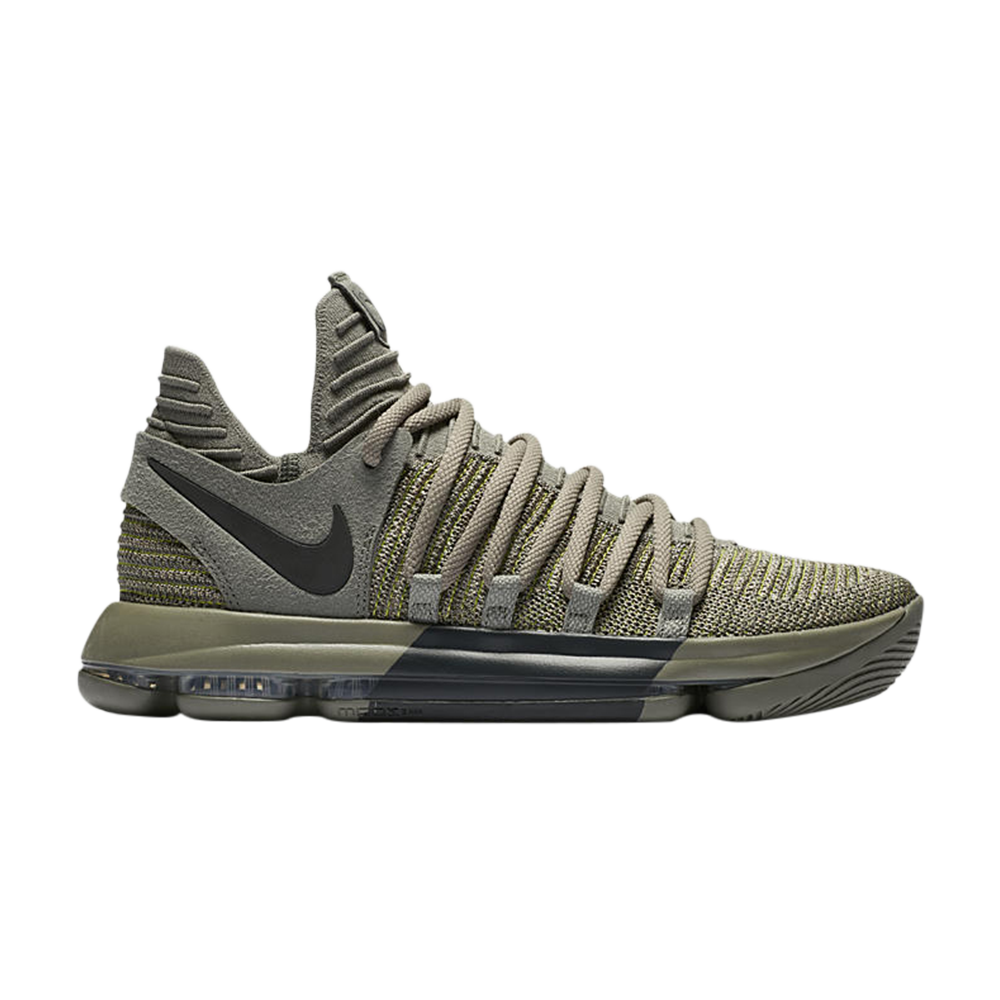 The KD 10 pays tribute to Veterans Day with a Flyknit upper in a variety of military green tones. The tonal offering features a lazy lace system that reduces forefoot irritation, while the Zoom Air cushioning unit provides optimal impact protection.

Kevin Durant's tenth Nike signature sneaker combines a lifestyle-inspired design with performance-enhancing technologies. The upper of the shoe is made of Cool Grey Flyknit, which contrasts with the full-length Zoom Air unit that appears in Igloo. The corresponding Swoosh branding on the upper adds a touch of Igloo, while the large laces with eyelets down by the midsole encourage a secure fit.

For a secure fit, the KD 10 has a Zoned Flyknit top, a Zoom Air-cushioned midsole, and larger laces. The 'Multi-Color' variant combines bright colors with a neutral grey across the tongue and collar, similar to past Durant signature styles. Suede panels on the heel and forefoot, as well as a solid black Swoosh, contrast with the brilliantly colored mesh. The insole bears Kevin Durant's autograph.

The KD 10 'BHM' features a Pan-African flag-inspired upper with a debossed gold '5.6.14' on the lateral side profile, recalling Durant's emotional MVP acceptance speech. The appearance is completed by a white, black, green, and red midsole with a full-length Nike Zoom unit and gold aglets, as well as a gold highlighted black Swoosh. The Kyrie 4 'BHM,' the LeBron 15 'BHM,' an Air Force 1 Low CMFT BHM 'Equality,' and an Air Jordan 1 Retro High 'Equality' were all released in January 2018. 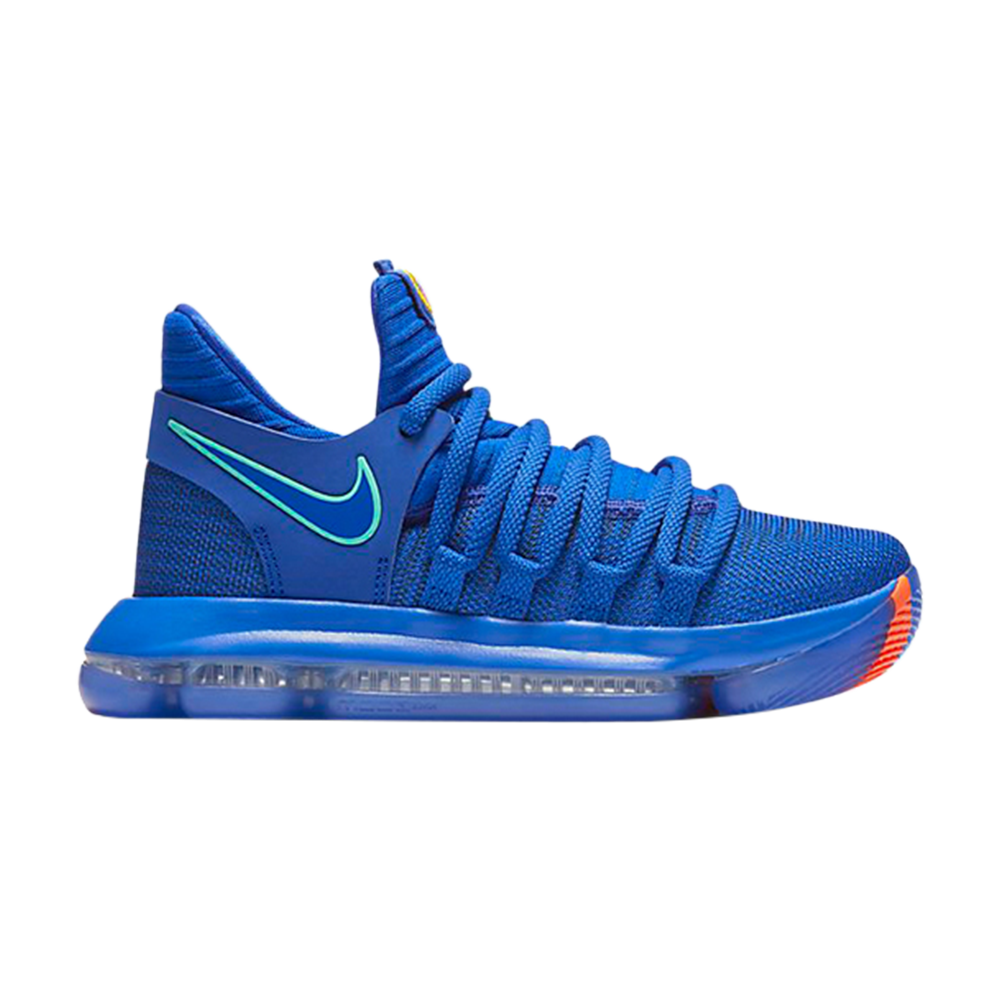 The Nike Zoom KD 10 GS 'City Edition' is a children's version of NBA great Kevin Durant's tenth signature sneaker. It has a sock-like mesh upper with a unique lacing mechanism that extends down the side panels to offer lockdown. The midsole, which rests atop a full-length visible Air unit and a rubber outsole, has lace loops that grow up from it. With aqua accents on the Swoosh and orange-red running through the traction pattern, the entire shape is cast in blue tones.

Nike released a multi-colored Santa Monica-inspired hue for Kevin Durant's 10th signature sneaker. The KD 10 'All Star' has a grey, Ocean Fog, Fuschia Black, and Hyper Orange Flyknit upper with a marbled design that culminates in the outsole. A distinctive tongue tag, an insole design, and an updated KD logo with birds and waves as a reference to the Californian vibe round out the sneaker.

Below are overall ratings of each unique features KD 10 gets from our Editors.

As the NBA’s Most Valuable Player, Kevin Durant has deservedly earned his superstar status on the court. And as a result, he’s using that recognition to sell a different kind of star power off the court with his signature shoe from Nike, the KD 10.

But what are the best KD 10 sneakers in market? And why would you want to own them? We took a closer look at these hot kicks and find out more about them above!